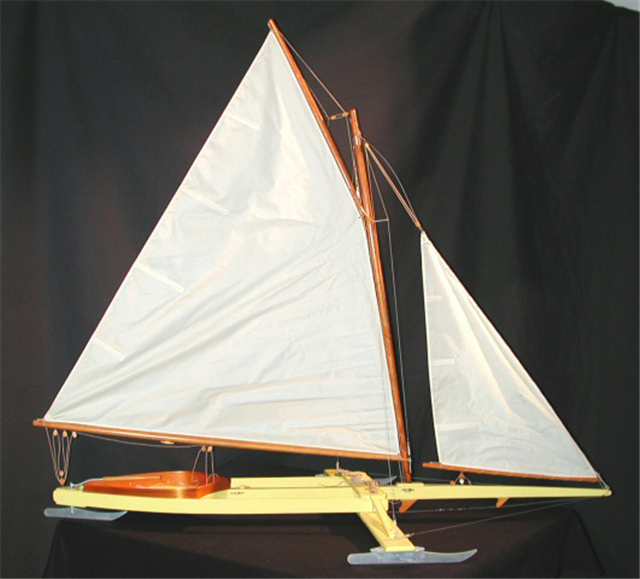 This miniature ice boat was originally built in Madison, Wisconsin around 1916-1917 by a member of the Bernard family. Museum records indicate the maker was twelve-year old Carl H. Bernard, but Bill Mattison, who knew the family, believes the model was actually built by Carl’s father, William P. Bernard. We do know that Carl Bernard completely rebuilt the model in the mid 1970s, replacing the main and jib booms, runner chocks and runners, tiller post assembly, and the cables, lines, cleats and pulleys. He also added a new paint job and nylon sails. In its current state, the model reflects the high finish standards and rigging style of ice boats of the 1970s, rather than the rougher, unpainted look of the 1910s. Mattison, a Madison ice boat builder and champion pilot himself, rigged the model for display in 1983.

William’s son Carl grew up in the culture of ice boating and began making models of them at a young age, some of which are pictured in Carl’s scrapbooks of the time. Carl’s mechanical drawing teacher at Central High School, Orien H. Dhein, recalled in 1935 that as a teenager in 1919, Carl “was continually designing and building boats and yachts.”

These models – or miniatures, as Carl labeled them in his scrapbooks – probably served several functions. As innovative builders, the Bernard’s likely worked out new design ideas in miniature first. Dhein noted that “several of the best racing boats in the field were built in model form previous to their actual construction on a full-scale pattern.” As commercial builders, the Bernard’s may also have used the models as sales tools. Their models were sometimes displayed in the windows of Madison’s Wolf, Kubly and Hirsig hardware store. The miniatures were probably also raced from time to time, just for fun.

One such fun event described by Dhein was a model ice boat regatta for Madison high school students in the winter of 1935. The date is not accidental. Ice boating got a boost in local popularity in the mid 1930s, largely due to Carl Bernard’s racing success. During his remarkable 1934 season, Carl won three major regattas: the Hearst Cup, the Stuart Cup (for yachts carrying less than 850 square feet of sail), and the Northwest Ice Yacht Association Class A championship, as well as the Northwest Free For All. Carl went on to win 19 ice boating championships between 1934 and 1954, earning himself a place in the first class elected to the Madison Sports Hall of Fame when it was created in 1963. 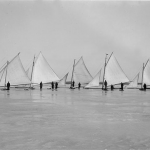 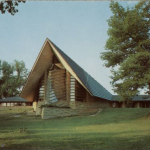 Unitarianism and the Madison Meeting House 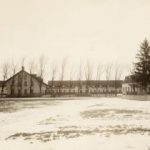 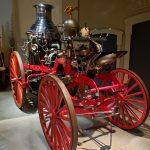