The practice of converting Hudson’s Bay Company blankets into coats began years before the company began mass-manufacturing point blanket coats in the twentieth century. During the fur trade, Native Americans hunters traded beaver pelts for wool point blankets. Point blankets were waterproof and warm, and easy to sew into coats. Native American and French-Canadian trappers and traders adapted the coats first, and called the new garment a capote, which means “hood” or “overcoat” in French.

With their bright stripes, distinct shape, and long history, point blanket coats became an iconic feature of the fur trade and the culture that grew up around it. The association was so strong that even when the fur trade ended, for many the point blanket coat continued to symbolize the legacy of that experience and a shared regional identity. This regional identity strayed across state and national borders. Interestingly, the popularity was not limited to one coat design, but instead connected to the rough wool material the coats were made from, their un-structured design, and the bold stripes. One reason for this was that throughout their history, point blanket coats were designed to meet local needs rather than one formal style.

One of the most famous examples of blanket coats comes from the Capture of Mackinac during the War of 1812. Mackinac, also known as Michilimackinac, is an island located at the point where Lake Michigan and Lake Huron meet. The island also has water access to Sault St. Mary and, beyond it, Lake Superior. Fur traders relied on rivers and lakes to carry their heavy stacks of pelts to trading posts, and Mackinac Island was strategically placed to be accessible by water from the Great Lakes as well as all of the rivers connecting the Lakes to the Great West. The island sent many tons of furs down the St. Lawrence River to be shipped to England or France. Traders, in turn, paid for these pelts in trade goods like wool blankets.

In 1812, British Captain Charles Roberts captured the island as part of the continuing war between Great Britain and the newly-created United States. However, Roberts was unable to obtain greatcoats from the British Army for his troops. To provide his soldiers with some protection against the harsh winter in the Great Lakes, Roberts improvised point blanket coats from the numerous wool blankets already on hand in the trading posts. He ordered point blankets to be cut and sewn into coats for his men by local Native American women, however Roberts requested one important change from the usual capote style favored by fur traders. The new “Mackinaw” style of point blanket coat was cut shorter. Its shorter length allowed for greater movement and less weight from the heavy wool.

Whether following Roberts’ design for the Mackinaw coats, or following their own design, point blanket coats were a working man’s coat. The design and style of the coat suggested rough living, cold winters, the fur trade, and a regional Great Lakes identity. After the end of the fur trade, the Hudson’s Bay Company transformed from a far trading company into a mercantile manufacturer similar to mail order companies like Sears Roebuck. In its new form, the Hudson’s Bay Company sold everything from coats to silverware, but the point blanket coat remained one of their signature items.

At the end of the nineteenth century, outdoor leisure became more popular among urban elites in cities like Chicago, Milwaukee, and even tiny Wausau, WI. With easier transportation to remote regions like Northern Wisconsin through railroads, city-dwellers, especially men, spent an increasing amount of leisure time in outdoor sports, hiking, hunting, fishing, and camping. One of the attractions nineteenth-century men felt for outdoor excursions such as these, was that such adventures offered the opportunity to claim a kind of masculinity they could not in the city. However, when wealthy businessmen traveled into natural areas, like northern Wisconsin, they often did not know how to dress for the environments they were going to explore. Instead, they looked to locals to show them how to dress for the wilderness. Now-iconic regional outdoor wear, like Stetson hats, were adopted by wealthy travelers after they saw local people wearing such clothing during the course of their daily lives.

Because of overhunting, the fur trade moved west from Wisconsin in the early nineteenth century, and by the turn of the twentieth century, it had ended. The Hudson’s Bay Company adapted to these changed by becoming, among other things, a mercantile company that sold a wide range of goods, including housewares and clothing. Following the trend for outdoor leisure, the retail arm of the Hudson’s Bay Company reinvented their point blanket coat and sold it to a different, more urban customer starting in 1923. The company marketed the coat extensively by showing its connection to Native American history, touting the coat as the choice apparel of rugged outdoorsmen and “women who stay young.” In 1922, the company standardized the coat-making process and sold their point blanket coats in catalogs and stores to urban markets, presumably including Wausau, Wisconsin.

When a local businessman wore this point blanket coat to the Wasau Winter Frolic in 1927, his clothing choice reflected the long history of the fur trade in the region, the equally long history of capote design, and this new era of outdoor leisure. Wearing a point blanket coat in Wasau was a way for the businessman to say: I know something about this local place and its history, and I am a man of the people. 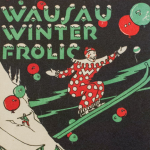 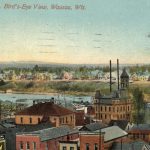 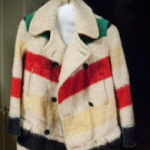 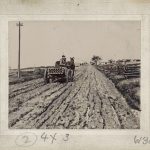