The lead mining industry of the 1830s and 1840s brought miners from Cornwall, England to southwestern Wisconsin. The miners brought Cornish traditions like the pasty, a filling food for hungry miners. The availability of pasties today demonstrates the lasting traditions of early European immigrants in Wisconsin.

Pasties are folded pastries filled with meat and vegetables. Traditional ingredients include beef, rutabagas, onions, and potatoes. They are small enough to fit in one hand, but contain enough calories to be a hearty lunch for a hardworking miner. Since meat was more expensive in the past, pasties contained mostly vegetables. In addition to holding the filling inside, the thick crust of the pasty helped the filling retain heat long enough that they were still warm by lunchtime. The pinched crust made a convenient handle- perfect for miners’ dirty hands.

In the 1830s, the lead mining industry took off in southwestern Wisconsin. Most settlers came to Wisconsin to mine galena, the mineral used to make lead. The miners founded settlements with names like New Diggings, Miner’s Grove, and Mineral Point. The settling of the frontier increased demand for lead shot and before lead poisoning was discovered, lead was used for water pipes, paint, and many other common items. Immigrants from Cornwall, who had experience working in mines, flocked to Wisconsin to take advantage of the work opportunities. The immigrant miners brought traditions from their home countries, like pasties.

The crust of the pasties played an important role in the miners’ superstitions. One superstition was that the lead mines were inhabited by the spirits of deceased miners, called “Knockers” or “Tommyknockers.” To keep the “knockers” happy, miners would leave the crusts of their pasties in the mines for the knockers to eat. They believed it was in their interest to keep the knockers happy: superstition said that the offering would encourage the knockers to show them where to look for deposits of galena.

In Wisconsin, lead mining peaked in the early 1840s. When demand for lead decreased, many miners moved on to Michigan’s Upper Peninsula to work in the copper or iron mines or to the California Gold Rush. Today, you can find pasties in the former mining regions of southwestern Wisconsin and the Upper Peninsula of Michigan, a continuing tradition of Cornish culture.

Listen to a National Public Radio segment on the tradition of pasty-making in the Upper Peninsula. Transcript available here. 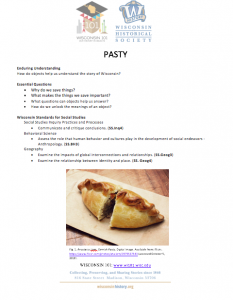 This is a machine used to lower and raise miners and materials through mine shafts in the lead mining region around Platteville, Wisconsin. Made from wooden supports with a wooden barrel shaft and crank attached to a rope with a bucket, a windlass like this is deceptively simple. Cheap to build and easy to…

Ice cream has been a delicacy for hundreds of years, but in the last century, Wisconsin has come to be considered home to some of the world’s best ice cream. Babcock Hall, established in 1951, has contributed to this reputation, establishing ice cream as a symbol both of Wisconsin’s dairy farming past and its appeal…

Mass immigration from eastern and southern Europe dramatically altered America’s ethnic and religious composition around the turn of the twentieth century. Unlike earlier immigrants, who had largely come from western European countries like Britain, Germany, …