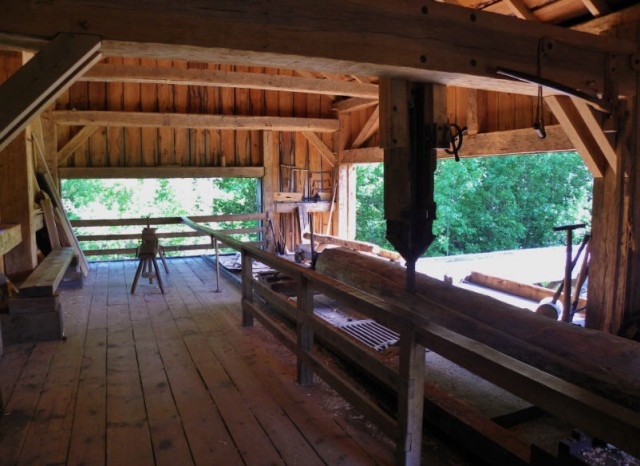 If you grew up in Wisconsin, you may be familiar with some of Wisconsin’s forests like the Black River forest, Menominee forest, or the Chequamegon-Nicolet forest. For hundreds of years these forests have provided Wisconsin with lumber used for building homes, factories, furniture, and more. Logging has been a big part of our state’s economy, yet many people don’t know much about logging. What do you think of when you hear logging? Paul Bunyan, the axe swinging, flannel wearing lumberjack? Log jams? There’s more to logging than lumberjacks toppling trees. To create finished lumber, those trees have to go through a sawmill.

When lumberjacks cut trees down, the wood is splintery and sappy. Sawmills turn rough wood into useful planks. These planks can then be used in construction projects. In the 1800s, those projects might have been homebuilding, creating railroad ties, or even laying plank roads!

Before the invention of electrical power, many sawmills relied on water to keep their saw blades in motion. Waterpower was useful because it was readily available through Wisconsin’s waterways. However, more efficient mills were created in the early 1900s that used electricity. This meant that many water-powered mills went out of use and were eventually torn down, but not all of them. The Wade House, near Greenbush, Wisconsin still has a working muley sawmill.

The muley sawmill was popular between the 1840s and 1910s for its speed and unique design. Instead of a rotating wheel blade, it used an up-and-down saw blade that moved at a rate of 325-375 revolutions per minute.

This was important for the people of Greenbush because the demand for logs was high. In the 1860s, for instance, the Sheboygan-Mississippi railroad was being built near Greenbush. The muley sawmill produced the pieces of wood between the metal tracks known as railroad ties.

An underwater turbine powered the muley sawmill. This type of sawmill was different than earlier types of sawing like the pit saw. The pit saw was simple. It relied on two people, a pit and a big saw. A log was laid across the pit. One person went into the pit and another stood on top of the log. The person in the pit would pull the saw down, cutting the log, and the person on top would pull it back up. This must have been awfully messy for the person in the pit. Although pit sawing was cheaper, because it relied on manpower it was less efficient.

Waterpower was important because it used a lot less human energy. The muley saw relied on water to turn a turbine that moved its saw blade. Making water turn a turbine is a complex process. It requires a dam and a turbine. The dam changes the flow of a stream or river and forces it towards a turbine. The water rushes by the turbine and causes it to spin. The turbines spins because it has blades on the inside that are movable. If this is a hard to picture, try and think about a merry-go-round. It spins when your hand grabs the railing and gives it a push. It’s the same for a turbine. Water pushes against the blades of a turbine and cause it to spin just like your hand on the railing.

Once the turbine started moving, its motion spun a metal pole that had a gear on its head. This gear spun horizontally, but it was attached to a vertical gear too. The horizontal gear spun and brought the vertical gear into motion. This vertical gear started a leather band pulley system which caused the saw blade to move up and down.

Just like the pit saw, the muley sawmill’s advantages did not last forever. Eventually faster and more efficient mills replaced the muley model. However, the sawmill in Greenbush split logs into lumber for over 60 years! Effective and durable, the muley is a steadfast part of the Wisconsin story. 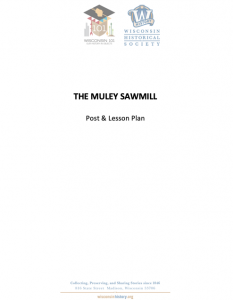 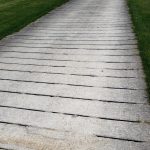 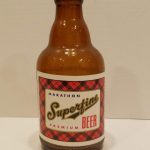 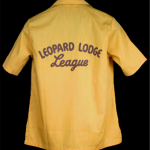