Can you think of a time when someone wanted you to eat something new? Did you eat it? For many people, if they saw lefse on a plate, they would not know what it was. Lefse looks like a tortilla, but it tastes like potato! Lefse is a traditional Norwegian food that is still special to many Norwegian Americans today.

When Norwegians made lefse over 100 years ago, they made enough for an entire year! To make so much they needed the whole family to help. It took two days to make enough lefse for a year. Families made the dough on the first day by boiling and mashing potatoes with a little flour and cream. They then had to cool the dough overnight. One the second day, they rolled the dough and cooked it.

Once the dough was cool, families used a special rolling pin to roll the dough very flat. This rolling pin was special because it had tiny grooves on it. The lefse was ready to cook when it was so thin a newspaper could be read through it!

The next tool used was the lefse stone. The stone was heated in a wood-burning stove. The stone would be removed from the fire once it was hot.  Families put the dough on the hot stone to cook. This step was tricky and took practice. There were no knobs to set the temperature on the stove. The stone had to be hot enough to cook, but it could not be too hot or it would burn the dough. Lefse-makers learned over many years how to tell if the stone was hot enough. Makers of lefse now use an electric lefse griddle to cook the dough instead of the stone. Do you think cooking the lefse is easier on a griddle?

The last tool was the lefse stick. This stick was a thin wood spatula. Like a pancake, when the dough had brown marks on it, it needed to be flipped over to cook the other side. To do that, people used the lefse stick. When the lefse was done cooking, it was placed it on a clean towel. Time to start the next batch!

Remember, in the past people made enough lefse to last a whole year. Since they couldn’t eat it all at once, they needed to store the extra lefse somewhere. This was before refrigerators and freezers. How do you think they saved lefse from getting moldy?

To keep the lefse from spoiling, the extra was stored either in wooden boxes or just covered with cloths and stacked. This process dried out the lefse so it would not mold. When family members wanted to eat lefse after it had dried out, they put it between two damp cloths until the lefse was soft.

While lefse is Norwegian, it is similar to other ethnic flatbreads, like: tortillas within Central American cultures, crepes in France, naan for India, injera in Ethiopian, or pita in Mediterranean cultures. Like many breads, lefse is eaten plain or used as bread.  In a meal, you can try lefse in soups the same way you might add tortilla strips or crackers. Or for dessert, eat lefse at room temperature with butter, sugar, and cinnamon spread over it and folded in fours or rolled.

So would your try a bite of lefse? 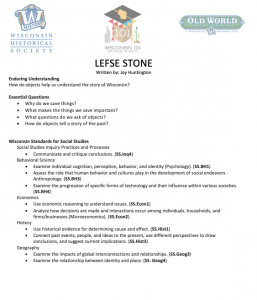 Learn how traditional lefse is made in a Wisconsin factory today!

The lead mining industry of the 1830s and 1840s brought miners from Cornwall, England to southwestern Wisconsin. The miners brought Cornish traditions like the pasty, a filling food for hungry miners. The availability of pasties today demonstrates the lasting traditions of early European immigrants in Wisconsin. Pasties are folded pastries filled with meat and vegetables.…

Ice cream has been a delicacy for hundreds of years, but in the last century, Wisconsin has come to be considered home to some of the world’s best ice cream. Babcock Hall, established in 1951, has contributed to this reputation, establishing ice cream as a symbol both of Wisconsin’s dairy farming past and its appeal…

When the wheat crop failures of the late nineteenth century jeopardized the incomes of many of Wisconsin’s immigrant farmers, the region’s Swiss population transitioned to a trade that they knew from the Old World: dairying …

Rose Mary Drab was born in southeastern Langlade County on April 23 of 1913. Her family had settled there the year before on a small farm south of Antigo. Originally named Drabowski, Rose Mary’s parents …

We have two related posts about baby carriers and the history of the Hmong community in Wisconsin. Enjoy!