When the Great Depression hit Wausau in the 1930s, Emelie Manthei (now Emelie Borth) was a high school student from a working-class family. Her father lost his job before finding employment with the Works Progress Administration (WPA), where he helped construct the large granite wall that still encircles Wausau’s Athletic Park. With little money to buy new clothes, books, or toys, Emelie and her siblings made do with the little material possessions they had. Emelie, for instance, only owned one threadbare dress. At the time, she looked forward to warmer weather so that she could cut off the sleeves and turn her dress into a summer frock.

Winters in northern Wisconsin are very cold, but Emelie had outgrown her winter coat. Her father did not have enough money to buy her a new one. Emilie’s walk to school each day lasted fifteen minutes, which is long enough to develop frostbite. During that winter, Emelie remembered, she was very unhappy.

Every day after school Emelie worked for a wealthy couple named Mr. and Mrs Burt who lived a few blocks from her high school. This was lucky, because when the Mrs. Burt learned that Emelie had no winter coat, she asked her husband to get a coat from the Winter Frolic Committee.

The Winter Frolic was a winter sports festival local businessmen organized for the town of Wausau. The Frolic only occurred intermittently during the Great Depression, but during the late 1920s, the festival drew crowds from across the state. During the Depression, the Winter Frolic Committee must have done some local relief work that included clothing drives.

When he went to the Winter Frolic Committee, Jack Burt chose a Hudson’s Bay Company point blanket coat for Emelie. The coat was once worn by a businessman during the Winter Frolic festival. In the late 1920s, this coat probably cost around $20, or $279 in today’s value.

Emelie preserved the coat in her closet for decades before eventually donating it to the Marathon County Historical Society. 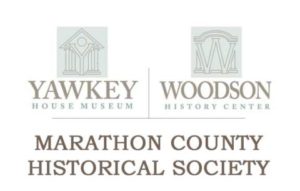