What did a bicycle rider in 1890 look for in a new bike? Safety and comfort, of course, but also beautiful construction—many of the same qualities that contemporary bicycle riders also seek.

The bicycle pictured here was donated to the Wisconsin Historical Museum, where it is currently housed. This model, still a bright blue, is a women’s safety bicycle with a lowered top tube to accommodate for dresses and skirts that were fashionable for women in the 1890s. Cycling was dominated by men during this time, but women often rode with male counterparts or with groups of friends on excursions out of the city into the countryside. This bicycle would have served any recreational user of the 1890s well.

The Sterling Safety Bicycle represents two sides of a Wisconsin bicycling story: bike manufacturing and recreational uses. The bicycle industry, which included not just manufacturing but also clothing, lamps, repair shops, and hotels, thrived alongside the boom in interest in the 1890s. This blue bicycle is one example of long legacy of the cycling industry in Wisconsin dating back more than 100 years.

The popularity of recreational biking correlates with the local production of bicycles. The first bicycle craze in Wisconsin, in the 1890s, helped reshape the Wisconsin landscape. Many Wisconsinites could not afford to buy a safety bike, but that didn’t stop them! Walter Atkinson of Ellenboro, WI, was so enthusiastic about biking that he carved his own bicycle out of wood. Even today, enthusiasts seek out organizations of fellow cyclists as they participate in and help to build political support for contemporary bicycling culture. 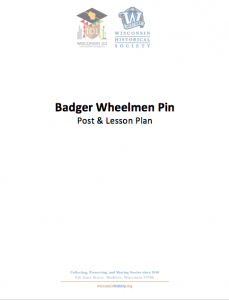